Family crests and coats of arms - does your family have one? Genes Reunited reveals the meanings behind the signs of heraldry. What do they represent? What’s the difference between a coat of arms and family crest? And what does a lion on a red background represent?

A coat of arms is a unique heraldic design on a shield, surcoat (loose outer coat or gown) or tabard (tunic or cape garment). Medieval knights used coats of arms to identify the wearer. Heralds, or announcers, would introduce knights at competitions and spectators could distinguish each knight by the design adorning his shield, helmet and armour. A knight's battle gear was so prestigious and spoke to all of his achievements, so the coat of arms evolved into a status symbol that provided commentary on one's family history, property and profession or occupation. 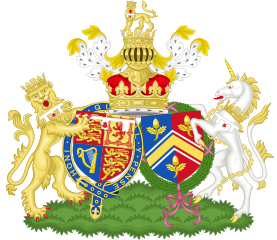 British heraldry rules only allowed a firstborn son to receive his father's crest upon his death. By default, the crest would go to the firstborn grandson of a daughter if the man had no sons. In a number of heraldry traditions, a couple blended their respective family crests when they married to form a hybrid version (note the Duke and Duchess of Cambridge's combined Coat of Arms on the right).

Gold (or): generosity and elevation of the mind

Maroon: patient in battle and yet victorious

Flowers usually represent hope and joy while fruit signifies felicity and peace. There are some more specific meanings for certain flora.

Rose: mark of the seventh son (a red rose symbolises grace and beauty while a white rose means love and faith)

Animals were frequently used as a main charge in coats of arms. They were shown in certain traditional postures (usually in positions of combat). Usually the animals chosen were fierce and ferocious looking or they represented positive traits such as wisdom, resourcefulness and loyalty.

Bear: strength, cunning, ferocity in the protection of one's kindred

Dove: loving constancy and peace; the Holy Spirit; with an olive branch in its bill, it signifies a harbinger of good tidings

Eagle: person of noble nature, strength, bravery, and alertness; or one who is high-spirited, ingenious, quick-witted, and judicious. If wings are displayed, it signifies protection. An eagle with two heads symbolises conjoining forces

Fish: a true, generous mind; virtuous for himself, not because of his heritage; also unity with Christ, spiritual nourishment

Fox: one who will use all that he/she may possess of wisdom and wit in his/her own defence

Hawk or falcon: one who does not rest until they’ve achieved their objective

Horse: readiness for all employments for king and country

Lamb: gentleness and patience under suffering. A lamb carrying a staff or banner with a cross is a paschal lamb which represents faith, innocence, bravery, gentleness, purity, and a resolute spirit

Leopard: valiant and hardy warrior who enterprises hazardous things by force and courage

Panther: fierce but tender and loving to children and will defend her children with her life

Stag/stag’s antlers: one who will not fight unless provoked; peace and harmony; strength and fortitude

Swallow: one who is prompt and ready in doing business; also bringer of good news

Some mythological creatures were also used on coats of arms and crests with specific significance in heraldry.

Centaur: eminence in the field of battle

Dragon/wyvern (dragon with only two legs): valiant defender of treasure; valour and protection

Griffin (head, wings, and talons of an eagle with the body of a lion): valour and death-defying bravery; vigilance

Harpy (virgin's face, neck and breast with the body of a lion): ferocity under provocation

Crosses on crests are usually symbolic of some Christian experience or sentiment. Figures such as angels and deities represent dignity, glory and honour.

Cross crosslet (crossed at each end): signifies the fourfold mystery of the cross

Cross: faith; service in the Crusades

Cross fitchée (cross pointed at base): a combination of cross and sword; unshakeable faith

Cross flory (cross flowered at each end): one who has conquered

Cross pattée or cross formée (cross which has arms narrow at the centre): military honour

Cross moline: the mutual converse of human society (said to represent a millstone)

Bells: power to disperse evil spirits. A hawk's bells denotes one who was not afraid of signalling his approach in peace or war

Chains: reward for acceptable and weighty service. With crowns and collars, this suggests the bearer bore the chain of obligation or obliged others because of services done

Letter (i.e., a, b, c): may represent great battles or tournaments beginning with that letter

Plume of feathers: sign of willing obedience and serenity of mind

You can trace your family history by researching your family tree on Genes Reunited. Perhaps you’ll find out if anyone in your family acquired a family crest or coats of arms. Now you’re aware of some of the meanings behind the colours and symbols, you might be able to determine some of your ancestors' traits and gain a sense of your family’s heraldry.