Our Gillies Plastic Surgery Archives contain 2,858 records, taken from operations performed between 1917 and 1925 by the legendry surgeon Dr Harold Gillies. Gillies is widely considered to be the father of Plastic surgery and became famous for the pioneering treatments he gave to thousands of young men who suffered horrific facial injuries fighting on the Western Front.

In the November of 1911 he married Kathleen Margaret Jackson in Marylebone, London and together they had four children, the youngest of whom, Michael, grew up to be a pioneering medic just like his father and was decorated for his contributions to the study of Malaria.

Following the outbreak of War in 1914, Harold joined up with the Royal Army Medical Corps in 1915 and on arriving in France where he acted as medical minder to a French-American dentist named Charles Valadier in Wimereux, near Boulogne.

Gillies became enthusiastic about Valadier’s efforts to replace missing jaws resulting from gunshot wounds by using revolutionary new skin graft techniques. He eventually left for Paris to learn more about skin grafting from renowned surgeon Hippolyte Morestin. Enthused by what he saw he return to England and persuaded the army's chief surgeon, Arbuthnot-Lane, that a facial injury ward should be established at the Cambridge Military Hospital, Aldershot.

Following the Battle of the Somme in 1916, the unit treated two thousand cases of jaw and facial mutilation and struggled to cope with the massive influx of casualties. Gillies realised that the Aldershot unit was inadequate and a larger sight was desperately needed.

In 1917 he opened The Queen's Hospital at Sidcup in South East London. The new hospital had convalescent units that provided over 1,000 beds to house the swathes of young men coming back from the Western Front with unimaginable injuries. Here Gillies and his colleagues developed many revolutionary techniques of plastic surgery and conducted more than 11,000 operations on over 5,000 men.

After the war Gillies developed a large and successful private practice. He travelled extensively, lecturing, teaching and promoting the most advanced techniques worldwide but did not achieve recognition for his work until he went to Copenhagen in 1924 to treat a number of Danish naval officers and men who had been severely burned in an accident.

Gillies’ patients have left us with some of the most iconic images of the War. Dr Harold Gillies’ book, ‘Plastic Surgery of the Face’, is available as a free download from the Gillies internet archive. These haunting images are remarkable in the way that they so bluntly illustrate the horrific cost of war.

Particularly well known images include the before and after portraits of Walter Yeo, Richard Walker and William M. Spreckley. All three can be found in these records that list their name, rank, regiments, injuries sustained and dates of admission and discharge.

Yeo is thought to be the first person to benefit from advanced plastic surgery.  Yeo was wounded on 31 May 1916, during the Battle of Jutland, while manning the guns aboard the battleship HMS Warspite. He sustained terrible facial injuries from cordite burns, including the loss of upper and lower eyelids. 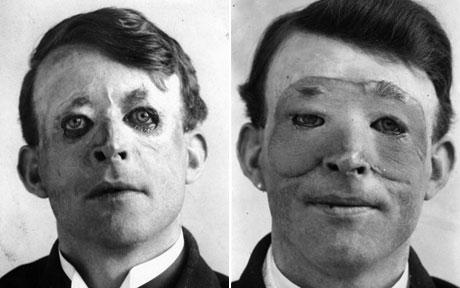 Spreckley, a Lieutenant from the Sherwood Foresters Service in the British contingent, 16th battalion, was Gillies’ 132nd patient and was admitted to the hospital on January 1917 due to a ‘gunshot wound nose.’ He was discharged three and a half years later in October of 1920.

Richard Walker, a Private in the Royal Lancaster Regiment of the British contingent, 3rd battalion was aged only 20 years old when he was wounded on 23rd October. Hospital with a ‘gunshot wound lower lip’ – a severe disfigurement that would require specialist attention if he were to go on to lead a ‘normal’ life again.

All three were successfully treated and their progress can be seen illustrated in ‘Plastic Surgery of the Face’.

Gillies’ incredible work was a major influence on his cousin, Archibald McIndoe, another renowned plastic surgeon who pioneered and further advanced techniques during the Second World War.

His contributions to both medicine and the war effort were finally acknowledged in 1930. He was knighted in the June Birthday Honours list, to which a proud Arbuthnot-Lane remarked; “better late than never”.