‘When you go home, tell them of us and say, for your tomorrow we gave our today.’ A D Day veteran’s return to the Beaches of Normandy.

Last year Genes Reunited produced a short YouTube video of my maternal Grandfather, Arthur Raymond Wilton, discussing his war time memories. On June 6th 1944, then only 18 years old, he was on board a motor torpedo boat guiding first wave of troops onto Gold Beach in Arromanches, Normandy.

A month after the video was made, and a full 69 years after the D Day landings, he returned to the beaches of Normandy for the first time since the war. The trip was funded by the National Lottery run charity ‘Heroes Return’ and I was fortunate enough to be able to join him. 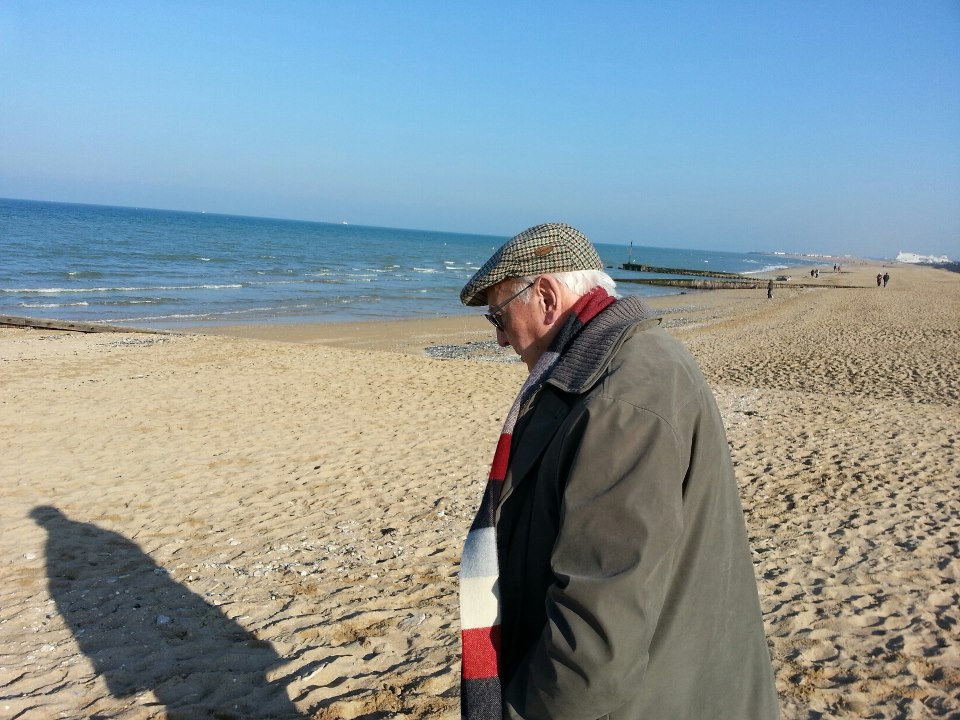 Originally from Prescot in Lancashire, Ray was working as a technical engineer when he decided to register as a reserve in the Royal Navy in 1942. “I was raring to go” he said, “two of my mates had already joined, so in 1943 when I hadn’t received my call up I just went down and volunteered. I was eager to get on and do my bit.”

After training as a telegraphist, he found himself serving on motor torpedo boat patrols in the Channel, looking out for German convoys and U boats. He described it too me as being “more like a pirate ship really, it was a little boat and we all lived together, it was very informal.”

On June 5th 1944, he and thousands of others sailed overnight through very rough waters to take part in landings scheduled for 7.30 am on Gold Beach.

He remembers; “The troops were put onto landing crafts about six miles out. Our job was to escort the landing crafts through the German mines and up onto the beach. We were under heavy shell and mortar fire. Quite a number of the crafts came to grief and there were lots of men struggling in the sea. You couldn’t help them. We were constantly being pushed from behind and we just had to go on. I can still see those lads in the water. It was very sad, very sad.”

“We got the first wave through and then had to pull back to guide in the second. You could hardly see the sea for ships. There were 138 warships spread along all the beaches. The Germans were positioned behind French holiday homes along the front and they put up a very strong resistance with mortars and machine guns. We were unscathed, not a bullet. But the poor bloody infantry couldn’t pull back.”

Returning after all this time was a very emotional experience and something he had always wanted to do. In his own words, it would allow him to “say a final thank you and good bye to all those young lads who never came home”.

Whilst there we visited Pegasus bridge, the site of the daring glider raid by D company, 2nd Battalion of the Oxfordshire and Buckinghamshire Light Infantry, famously depicted in the 1962 film ‘the longest day, and the airborne cemetery in Ranville. We then visited sword beach and then Juno where Canadian troops landed before Ray finally returned to Gold beach for the first time since the war.

Gold Beach, saw some of the heaviest casualties suffered by British troops while storming the tough defences at Asnelles. Standing on the sand you could see just how little cover there was for the tired, sea sick troops who waded out of the water straight into German machine gun and mortar fire. It was a sobering experience. We walked in silence for about half an hour as my Grandfather took it all in before he said his final thank you and goodbye.

We ended the trip with a visit to the Bayeux War Cemetery, the largest Commonwealth War cemetery in Normandy and where the dead of gold and sword beach are buried. Seeing the endless, immaculate lines of white stone slabs had the greatest impact of all. Every single one represented a life cut short, young men killed in the prime of their lives who left behind mothers, fathers, brothers, sisters and children. 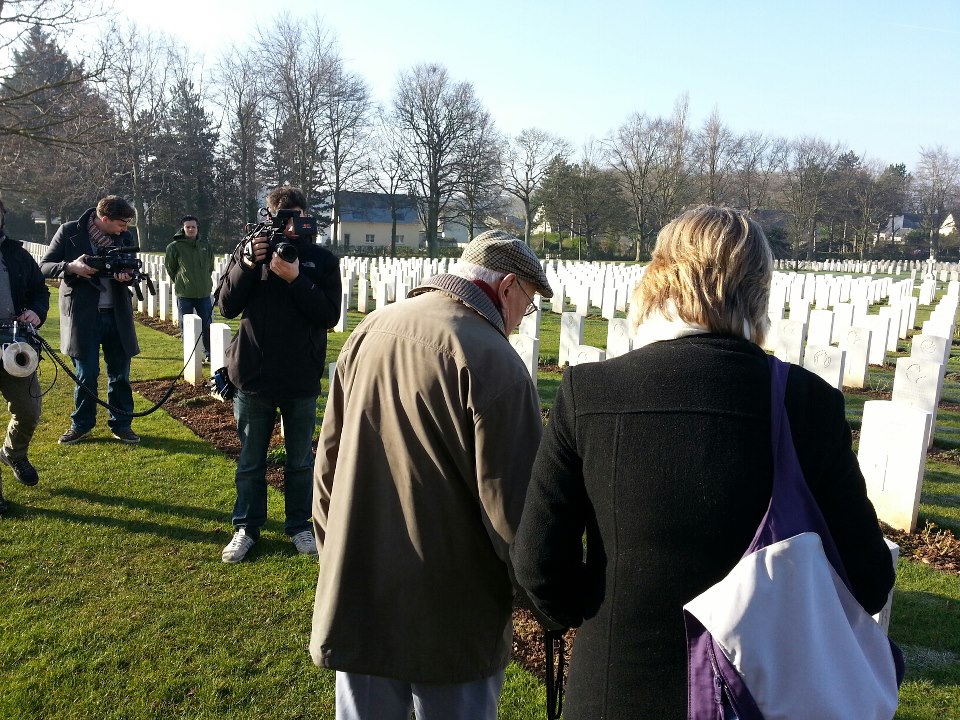 It was the ages inscribed on the grave stones that was truly heart breaking. The vast majority were between 18 and 20 years old, very few appeared to be over the age of 25. My Grandfather is fortunate to have had a further 70 years of life since the war, during which time he has had a successful career, a happy marriage and has been able to watch his children and grandchildren grow into adulthood. All things most of these young men never got to experience.

Accompanying Ray on his return to Normandy was an incredible experience filled with many emotional moments, some heart breaking, others heart-warming. Although what he did is incredible to me, he was but one of hundreds of thousands of young men who went with a willing heart to sacrifice their lives for the freedom of others.

70 years on John Maxwell Edwards epitaph still rings true, and with so few of those who experienced the war first hand left, it is now more pertinent than ever; ‘When you go home, tell them of us and say, for your tomorrow we gave our today.’

After D Day, Ray continued with active service in Europe, the Arctic Circe and Far East, before returning to England in the Christmas of 1945. He remembers; “My dad had died in 1943 but it was wonderful to see my mother and my two sisters. We had a lovely reunion.  Sadly I lost my best pal in the air force. He was in Bomber Command and was killed over Berlin. But there were still a few good mates around.”

He says; “I feel so very fortunate to have lived such a long and happy life and this has only been made possible by the millions of others who sacrificed so much during the war. Going back after all these years with my daughter and grandson really drove home how lucky I have been and how important it is to remember and honour who gave their tomorrow for our today.

You can watch the Genes Reunited video here.

You can see the full National Lottery video part 1 here and part 2 here.