Edith Garrud, otherwise known as the “Jui jitsu suffragette” trained the all-female bodyguard who protected suffragettes from aggressive police as women campaigned for the vote. A true feminist icon, Edith was wonderfully ahead of her time, and choreographed fight scenes for films, wrote magazine features, and taught self-defence.

Edith Margaret Williams was born in Bath, Somerset, in 1872. Her family later moved to Wales where she met and married William Garrud, a physical culture instructor who specialized in gymnastics, boxing and wrestling. The couple eventually moved to London, where William began work as a physical trainer.

In 1899, Europe’s first Jui jitsu instructor (and founder of the eclectic art of Bartitsu) Edward William Barton-Wright introduced the couple to Jui jitsu. By 1904, the Garruds were training under the legendary Sadakazu Uyenishi, one of the first Japanese practitioners to both teach the art outside of Asia. When Uyenishi returned to Japan three years later, the couple took over his academy, with Edith leading the women’s and children’s classes. 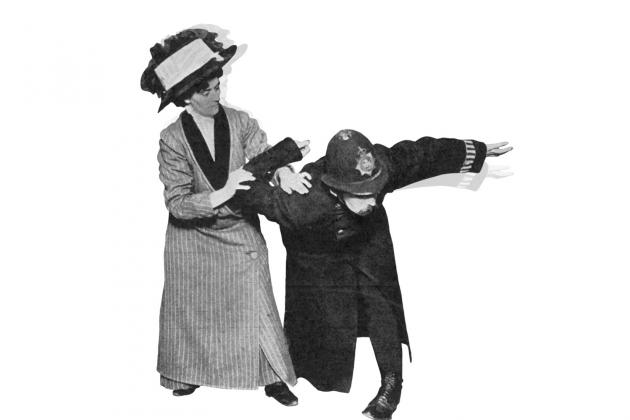 The Garruds also popularised Jui jitsu by performing in many exhibitions throughout London and by writing articles for various publications. In 1907, Edith was featured in Britain’s first ever martial arts film. In 1908, Edith began teaching classes open only to members of the Suffrage movement and choreographed the fight scenes for the 1911 film ‘What Every Woman Ought To Know’.

In 1913 the British government instituted the so-called Cat and Mouse Act to tackle the Suffrage movement. The act meant that suffragettes on hunger strikes could legally be released from jail in order to recover their health and then re-arrested on the original charge. The Women’s Social and Political Union responded to this by establishing a thirty-member, all-woman protection unit referred to as “the Bodyguard” to protect released suffragettes from re-arrest.

Under Edith Garrud’s training, the members of the Bodyguard became experts in Jui jutsu and self-defence using Indian clubs. The group were trained in secret and fought a number of well-publicised hand-to-hand battles with police officers in the streets of London. They proved highly effective and were even able to stage successful escapes and rescues of captured Suffragettes before being disbanded in 1914 after WSPU leader, Emmeline Pankhurst, decided to suspend militant suffrage actions to support the war effort.

The Garruds taught self-defence and Jui jitsu instructors until 1925, when they closed their school. Although the public eye no longer focussed on the couple so keenly, Edith’s remarkable contribution to the Suffrage movement was celebrated on both stage and screen. Edith died at the age of 99 in 1971.