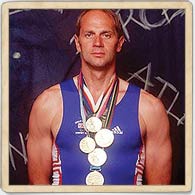 Having set out to win three Olympic Gold Medals at the beginning of his career, Steve went on to win an incredible five Golds in five successive Olympic Games from 1984 to 2000. Anthony Adolf explores the Redgrave family history.

The larger-than-life bronze statue of Sir Steven Geoffrey Redgrave, C.B.E. dominates the waterfront at Marlow, Buckinghamshire, the Thameside town in which he was born and brought up. An Olympic rower by 1984, he went on to win five gold medals for Britain, and has carried the union Jack at two openings of the Olympic Games. He has three children, Sophie, Zak and Natalie, who herself has had a successful career in Oxford University Women's Boat Club, competing in the 2011 women's boat race, which Oxford won. Their ancestry goes back to Suffolk village, that is called Redgrave. The place name is an Anglo-Saxon one, rendered Redgrafe in the eleventh century. Its first element is either hreod ('reed') or read ('red') and the second is either graef ('pit') or graf ('grove').

In Domesday Book (1086) it had about 60 inhabitants (plus a number of creatures, including 30 pigs and 30 goats), and in 1327 it had 38 taxpayers. The village was part of the estate of Bury St Edmunds Abbey, and, after the Reformation it came into the hands of Sir Nicholas Bacon (father of the famous Sir Francis) who built the hall and was buried there.

Because it was owned by an abbey during the time when surnames were arising, there was no lordly family who became 'de Redgrave'. We can be confident that all the people surnamed Redgrave were the descendants of tenants there who, once they left, became known as 'from Redgrave'.

Early references to the surname include Ebrardus and Warinus de Redegraue in the pipe rolls in 1179 and 1180 and Robert de Radgrave, who was murdered in 1256 by Hugo de Theford, as related in the close rolls.

One family line of Redgrave had settled in Northamptonshire by the early 19th century. In 1824, Cornelius Redgrave was born there. His descendants include the famous acting family of Redgrave, including Vanessa and Corin.

Another line from Suffolk crossed the border north into Norfolk and settled at Seething, which is just to the north-east of Norwich. Steve's probable great great great great great grandfather Samuel Redgrave and his wife Elizabeth were living there by the 1750s. They had four children, two Samuels, Elizabeth and Steve's ancestor Joseph, who was baptised there in 1750.

Le Neve is a fine old East Anglian surname. They claimed descent from the estate of Lenenbes in Tivetishall, Norfolk. Their number included Sir William Le Neve (c. 1600-1661), a herald who became Clarenceux King of Arms, and who acted as King Charles I's herald to the Parliamentarian army before Edgehill in 1642. Interesting too was Peter La Neve (1661-1729), the great Norfolk antiquary, whose work forms the backbone of most histories of Norfolk and its families.

It is the son Joseph who interests us. He was baptised in 1783, and was almost certainly the same as Steve Redgrave's earliest proven ancestor, his great great great grandfather Joseph, who gave slightly differing ages to the 19th century census enumerators, indicating a birth about 1777-1780, but said consistently that he was born in Kirstead. His idea of his own age was a bit uncertain, so he may have been born in 1783 or, more likely, his parents delayed having him baptised for a couple of years, as often happened in those days.

The son William Redgrave (or Redgrift) was Steve's great great grandfather. William started his working life as a servant to the Webbs of Walpole, but went on, like his father, to be a labourer. He married Hannah Gilman and settled in her native village of Bramfield, Suffolk where they had children including Ellen (1861), Mary Ann (1864), William (1867) and Harry (1868). William senior died in 1871, after which the widowed Hannah kept her family together by taking in lodgers, and keeping cows, which she was doing 'on her own account' by at least the 1901 census.

Nineteenth century East Anglia was a beautiful place, beloved of landscape painters, but it was a miserable area to make a living, as cheap grain imports from the newly cultivated American prairies forced East Anglia into a farming depression. The son Harry Redgrave, who was Steve's great grandfather, left Bramfield with his childhood sweetheart Susannah Chapman and travelled south, until they reached the Thames at the prosperous market town of Marlow, Buckinghamshire. Here, in 1897, they stopped, married and had children, including Richard (1899), Edward Francis David (1902) and William (1908).

Edward was Steve's grandfather. He became a carpenter in Marlow, and in 1922 he married there, to Sheila Doris Akehurst, whose father James Henry Akehurst was a quartermaster sergeant in the Royal Garrison Artillery.

Their son Geoffrey Edward Redgrave was born on 2 June 1930 at 16 Newton Road, Marlow. Having grown up beside the Thames, Geoffrey had an affinity to the water, but instead of becoming a rower, he joined the Merchant Navy. Six feet and two inches tall, with blue eyes, brown hair, a fresh complexion and a tattoo on his left arm saying 'MOTHER', Geoff Redgrave served through the Second World War, in terrible danger from the German submarines, yet survived, and was discharged in 1947. His 'seaman's pouch' in The National Archives includes a photograph of him, looking every bit as butch as his career and description suggest.

After he had left the navy, Geoff Redgrave returned to Marlow, where in 1952 he married Shiela Marion Stevenson, daughter of Harold Stevenson, a local bus driver. Their son Steve was born on 23 March 1962 - and Olympic greatness awaited.