Britain is often described as being a nation of animal lovers. However, our obsession with our pets is by no means a modern phenomenon. Whilst trawling through the 1911 census, you may come across an individual whose name, age and occupation sound rather suspect. This could be because they were actually a household dog or cat listed as a member of the family.

One such example is Roger the Airedale Terrier. Roger was a member of with the Little family in Dulwich, London and the head of the house, James Little, included charming details about his four legged friend in his census return. He wrote: ‘Incidentally, we have an Airedale Terrier. I do not know whether particulars are required, but in case you want them here they are!’ 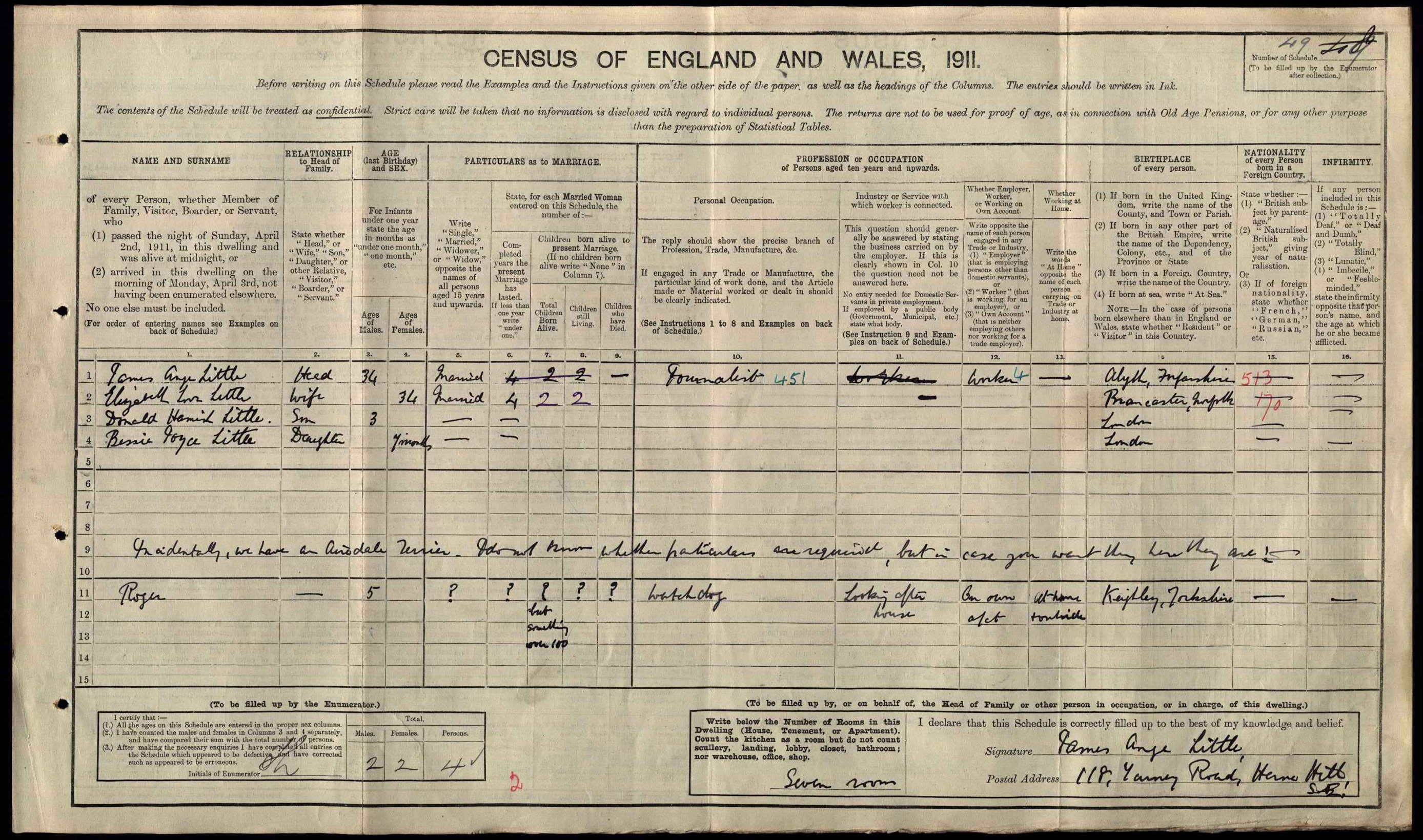 Roger was described as being five years old and having been born in ‘Keighley, Yorkshire’. His occupation is listed as a ‘watchdog’, ‘employed on own account’, and the industry he was connected to was ‘looking after house’. Roger appears to have been of good breeding as in the section of the census form dedicated to listing an individual’s children, James amusingly wrote “?, but something over a 100”.

Dogs were obviously not the only creatures our Edwardian ancestors viewed as part of the family. The Ladbrook family of 358 Bramford Road, Ipswich included Bobs, the black cat. He was described as being one year old and his birthplace as “a stable in Ipswich”. His occupation was listed as “Nomad” working in the “Mice Hunting” industry, “mostly” from home. 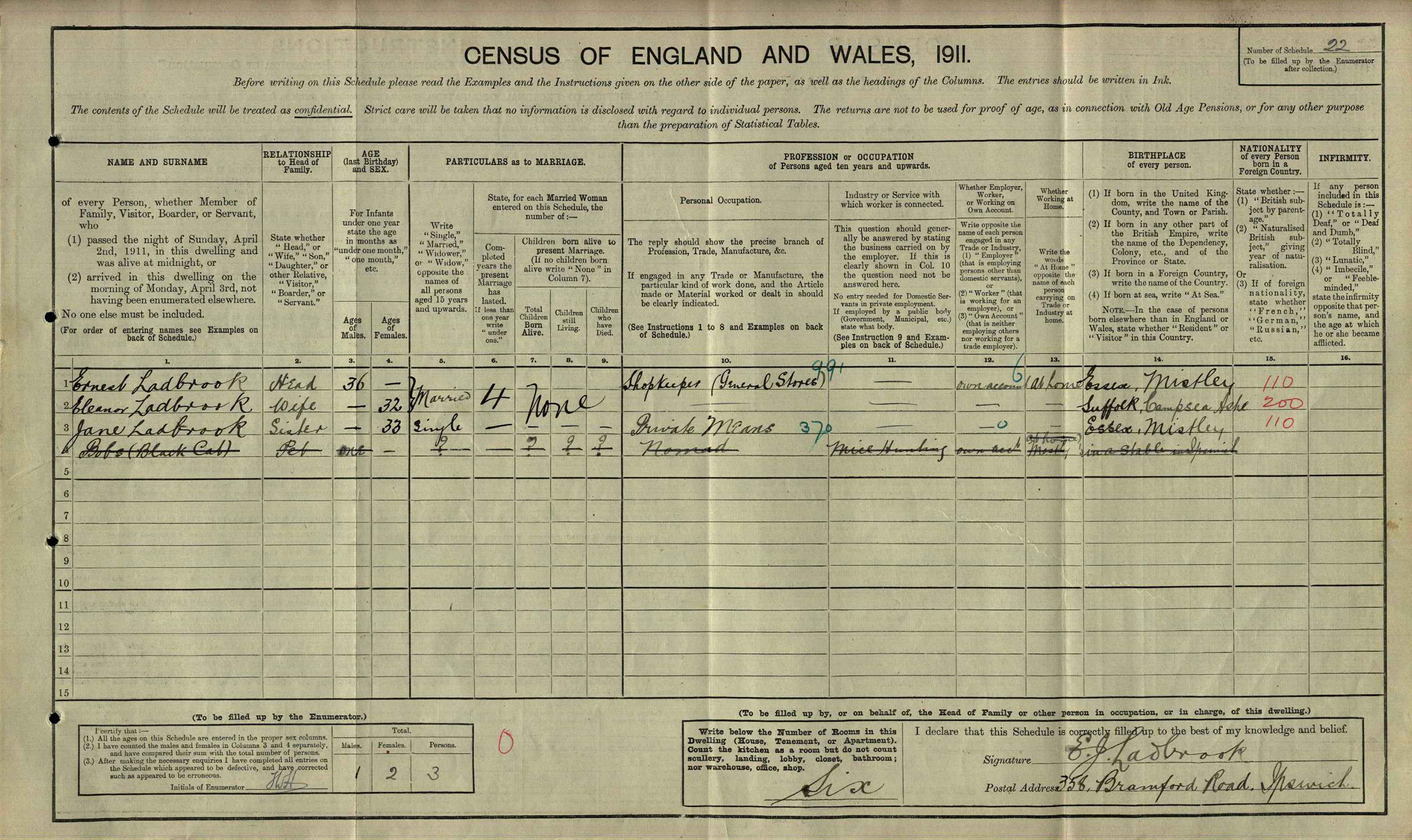 The Rigby family of Upton Road Birkenhead also included their cat Tom in their census form. “Tom Cat” was listed as being an 8 year old, married Mouse Catcher, Soloist and Thief with 16 children. His birthplace was listed as Cheshire and he was described as being “speechless” in the “infirmity” section of the form.  The head of the household, William Rigby, obviously had a sense of humour as underneath he wrote "All the above mentioned have Breakfast, Dinner, Tea and Supper. Eat Standard bread Drink sterilized milk. Sleep with the windows open. Wash our Feet once a week etc. God Save the King RSVP”. This, along, with Tom’s details, was crossed out by an annoyed enumerator. 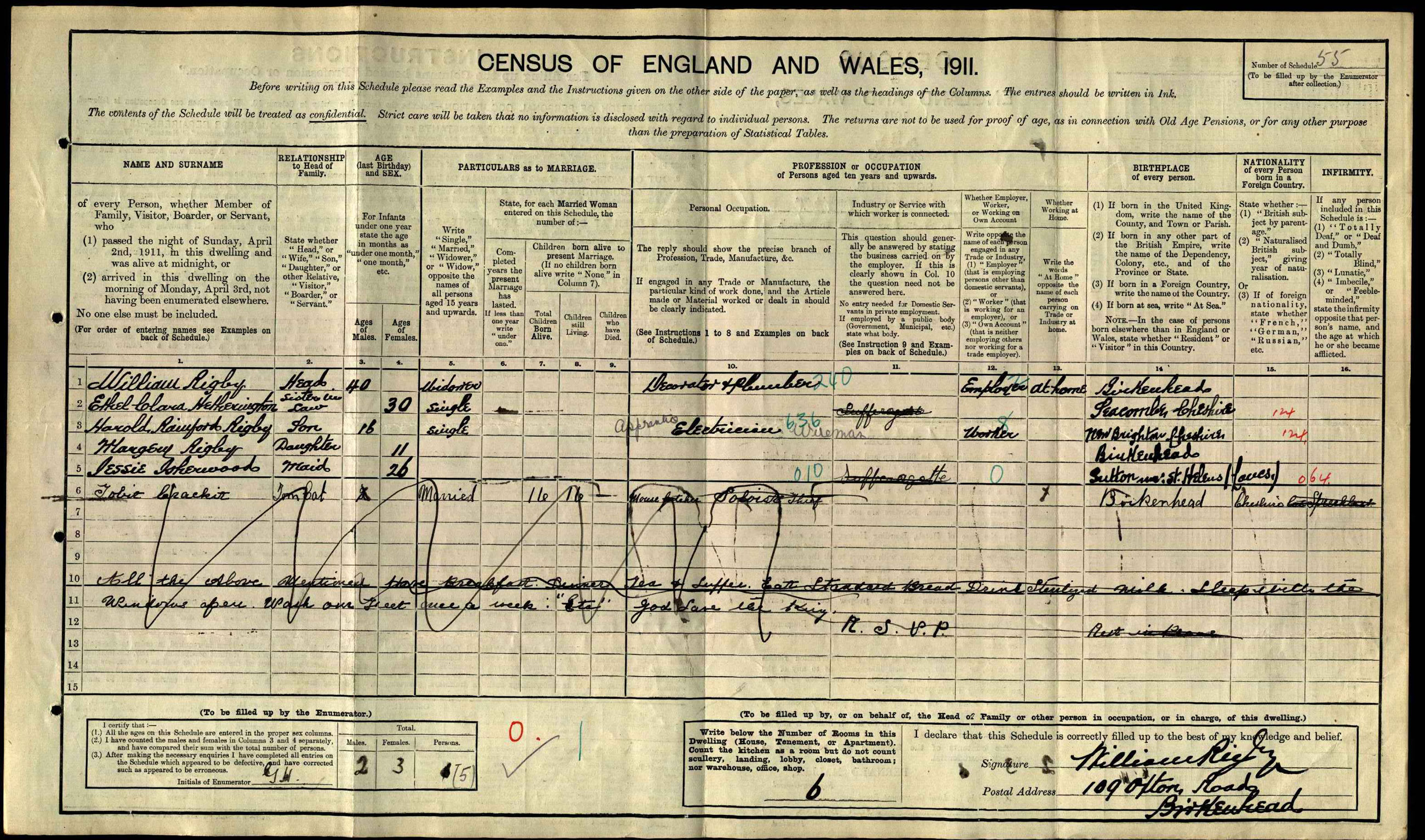 Indeed it appears that the Edwardians were just as fond of their pets modern Britons. Other animal entries in the 1911 census include that of the Stroud family of the Northumberland Arms, Tottenham, who lived with a 'cock parrot', '3 dogs - 2 male, 1 female', and '1canary' and the household of Francis Catherine Stone in Basford, Nottinghamshire who included Timothy the Cat, aged 7, and Jack the Dog, aged 8 in her form.

Why not search the 1911 census today and see what oddities you can uncover? Start searching here.