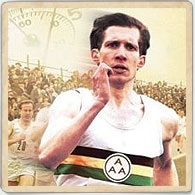 Sir Roger Gilbert Bannister is an English former athlete, best known for being the first person to run a mile in less than 4 minutes, in 1954. Anthony Adolf delves into the Bannister past.

Bannister is a metonymic surname, reflecting the Medieval occupation of a banastre, or 'basket' maker. Early references include Turstan Banastre, who appears in Lincolnshire records in 1149; Richard Banastre in 1186 in the Cartulary of Eynsham, Oxfordshire; Richard Banester in 1459 in an old deed from Staffordshire and John Banyster who became a freeman of York in 1554.

Because basket-making was so widespread and necessary an occupation, the surname was common in many parts of England. Its distribution in the 1881 census shows it commonest around London and Liverpool, and this is relevant to our story, because the earliest ancestors of Roger Bannister whom we have traced so far were from Lancashire, and specifically in the Colne Valley, where it passes beneath the flanks of Delf Hill, whose rugged moorland scenery inspired Emily Bronte's Wuthering Heights. On the other side of the valley is a less romantic hill, Pendle Hill, haunt of the Pendle Witches or, at least, the location of the fierce persecution of local women who were accused of witchcraft in the early seventeenth century. None of their surnames appear in Roger's family tree, but doubtless there were many uncharted family lines that intertwined his people with theirs.

In the eighteenth century, the population consisted mainly of small farmers and of hand-loom weavers. The population was a necessarily hardy one: generations of farmers who strode over the high hills in all weathers handed down their genes, to contribute to the physical stamina of Roger Bannister himself.

His earliest ancestor identified so far is Roger's great great great grandfather Absalom Bannister, named after the handsome third son of the Biblical King David. He was of Great Hill, and married Martha Holme in Colne on All Souls' Day 1786, before witnesses Thomas Wilson and William Hartley. They had children including Roger's ancestor John Bannister, who was baptised in Colne on 19 September 1790. Colne was a chapelry, within the parish of Whalley. In the north, it was not unusual to have small populations spread over wide areas, and to save whole communities traipsing many miles over the moors to church, chapels were built in the townships, and remained subsidiary to the main parishes, though in the Victoria era some chapelries became parishes in their own right.

John Bannister, who was Roger's great great grandfather, married Martha, daughter of John and Sarah Simpson on 26 February 1811. He was a weaver, probably a handloom weaver, and thus followed one of the most typical trades in the area, and lived in lived in Trawden Forest.

Trawden means 'hollow valley'. It is indeed nestled in the eastern folds. Trawden Forest is an area of stone-walled fields below the bleak moors, rather than a forest of trees. Their first two children, Sarah and Roger's ancestor John, were born at Moss House and baptised at Colne in 1811 and 1813 respectively. Then they had Mary (1815), Martha (1817), Thomas (1825) and Joseph (1827), who were not baptised. Finally came Betty and William, both baptised at Colne in 1833.
By June 1837, John had stopped weaving and had taken the lease of a farm in Trawden, that in the 1851 census was measured at 31 acres, on which he employed three labourers. In June 1837, with the start of the General Registration of births, marriage and burials, many people who had failed to have all their children panicked, and there was a great rush of baptisms. John and Martha brought Martha, Mary, Thomas and Joseph to the Trawden Wesleyan Methodist Chapel, and these four were baptised by the minister, John Ruby. Now, all was in order.

The son John, who was Roger's great grandfather, was baptised in Colne on 7 November 1813. He was a grocer by 1843 and a cotton spinner, probably in the growing mill at Trawden, by 1869. He married first to Jane Hartley, who also worked as a weaver, on 2 April 1835 in Colne. She died, probably in childbirth, and John remarried to a farmer's daughter, Sarah Pilling, at Trawden on 7 December 1852. One of the witnesses was John Hartley, probably a brother of the deceased Jane. Such remarriages were not uncommon: widowers with children had no choice, for they simply had to have a wife to look after their young families.

The son David, Roger's grandfather, was born at Trawden on 21 November 1843. He had a perfectly normal childhood, though the 1851 census, amusingly and presumably erroneously, lists him as a schoolgirl! By 1861, and firmly male, he was a 17 year-old cotton power-loom weaver; a fire tenter of Jumb in Trawden by 1871, a cotton manufacturer in 1881 and 1891 and a retired manufacturer thereafter, living latterly in Church Street, Trawden. He had obviously inherited his father's ambition to better himself.

David married Jane Tatham on 2 March 1869 at the Fulledge Road Wesleyan Methodist Chapel, in Burnley, before witnesses (and obviously relatives) Ezra and Jane Hartley). Jane was born about 1852, out of wedlock. Her mother Betty Tatham was a Trawden lass who married Joseph Driver, a stone quarrier in 1857 - thus becoming, as she was recorded, 'Betty Driver' (coincidentally the same name as the actress who plays Betty Williams in Coronation Street).

David and Jane's son Ralph Bannister, Roger's father, was born on 29 April 1894 at 31 Church Street, Trawden. He took full advantage of his parents' small rise in prosperity, and the education it had afforded him. The 1911 census lists him as a boy clerk in the civil service, lodging at 9 Lorrimore Street, Walworth, London. He went on to become a clerk at the Board of Trade and a member of the comfortably-off middle class. He married Alice Duckworth, daughter of Robinson Duckworth, cotton manufacturer, on 30 April 1924 at Burnley Unitarian Chapel.

Their son Roger Gilbert Bannister was born on 23 March 1929 in north London. He became an athlete, competing at the 1952 Olympics and Helsinki, but it was not until 1954 at Oxford, with future Guiness Book of Records author Norris McWhirter watching closely, that he gained world fame as the first man ever recorded as running a mile in less than four minutes. He went on to become a distinguished neurologist and Master of Pembroke College, Oxford, and was knighted as a Commander of the British Empire.

The Bannister family's story is one of many generations of gritty northern survival, supported by a strong Protestant work ethic. When industry came, they understood and used its potential to better themselves, and used the education it gained them to leave their roots behind and seek a new life amongst the middle classes in London. But such families are typical. What the Bannisters achieved was exceptional.